I’ve grappled with some people’s styles over the years and people have probably grappled with mine as well. It’s human nature. Outside of the fact that we have many profiling tools, there are some behaviours that many of us notice – either online or in person – where we wonder if there is something wrong with the way we see people, if there might be something amiss with ourselves, or if there really is justification in the names we mutter under our breath about the way some people show up.

Friend or Foe? The Fickle Five

So what are these personalities of our buyers, and potentially ourselves: 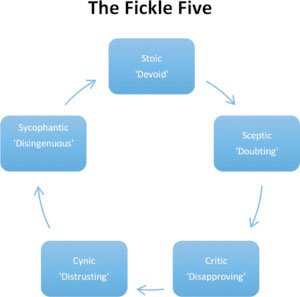 These people sitting opposite us who are devoid of emotion in our interaction with them because they base everything on reason. Stoicism was actually a school of philosophy founded back in the early 3rd century BC in Greece.  Emotions were viewed as irrational. It’s not that people have no emotions, they simply believe that emotions cloud the outcome and in those areas where you have no control, then why bother with emotions? ‘You’re saying I won’t get the discount if I don’t sign today? ‘Oh well, no problems. Stoics are alive and well today sitting in our decision makers chairs and definitely can’t be manipulated by emotion.  People who show stoicism are usually viewed as cold and hard, especially women in the workplace, when it really is only a situational thing.

You’d be forgiven for thinking that their doubting behavior might be a case of rejecting your ideas or their tendency to pounce on anything that might resemble shifting the status quo is due to you. Skepticism is also based on reason but unlike the Stoics, they are open to possibilities that bring logic and emotion into the equation. Skeptics need to see evidence and proof and have reference points before they will buy into any new idea. The word ‘Skeptic’ comes from the Greek word skepsis, which literally means ‘examination, inquiry and consideration’. Socrates, the philosopher in Greek times stated,  “All I know is that I know nothing.” And some of our buyers today are certain of nothing and therefore need us to help them in every proof defining way, providing strong reasons for them to shift the status quo, especially if they haven’t yet experienced what we have to offer.

We sometimes confuse a skeptic with a critic but believe it or not, we need critics. We need a professional who can make an assessment or give us their opinion whether we want it or need it so that we can look at things from different angles. ‘The word “critic” stems from the Greek word meaning “able to discern”, which in turn means a person who offers reasoned judgment or analysis, value judgment, interpretation or observation.

When we look into what a critic really is and consider the varying critics in our world today they are generally associated with professionals. Think – the arts, movies, food and fashion. What matters is our response to the critic and also the meaning we place on the word and our reaction to a critic. If everyone agreed with us, the world would not be innovative or evolve to the extent it has, so we need critics. And we need critics who are able to articulate their case in a way that is insightful. Once a personal opinion outweighs a professional one, then we enter a different realm.

It has been claimed that “healthy skepticism may have given way to corrosive cynicism”. A cynic is not what you want to be nor who you want to be sitting opposite. They are someone who thinks the worst of someone or something and their personal point of view and values cloud the conversation. They believe people act out of self-interest, that there are ulterior motives and in the sales environment you see it with buyers who believe salespeople are only in it for their benefit – the money! A cynic’s beliefs are so ingrained and believe it or not, Cynicism was actually an ancient Greek philosophy and education system based on agreement with nature and living a simple life free from all possessions. Something completely changed because by the 19th century it had completely flipped its roots to mean a disbelief in the goodness of human motives and actions. Cynicism today can be a major mask for depression and a recent study of over 622 people published in the Neurology journal of 2014, linked ‘cynical distrust ‘with dementia. It was proven people with cynical distrust were three times more likely to develop dementia.

Lastly is the group of people who win you over with false flattery. Known as sycophants, a word that held its origins in the Greek meaning ‘false accuser’, today it retains that same meaning. However, in English, it has come to mean someone who insincerely flatters you for some kind of personal gain. They typical try to gain attention by flattering wealthy or influential people and it is so obvious to everyone else, but themselves. They agree with everything their targets say and think for their own gain, even if they don’t mean it.  We recognise it today through our vocabulary which is filled with language, phrases and words such as ‘sucking up’ or ‘brown nose’ or ‘a crawler’. To win a sycophant over is to play to their ego.

So, do you fit somewhere on that scale?

Do you know other people who fit on this scale?

Human nature is a wonderful thing because I think we all travel between different parts.

Whether you believe you are a Stoic, a Skeptic, A Critic, A Cynic or a Sycophantic – in the words of the great Greek philosopher Rene Descartes, ‘I think therefore I am’.

How do you think? Who are you? How might you be perceived?