Menu
When I received an email from LinkedIn to ask me to write about a woman I admired for International Women’s Day 2015 ( #IWD2015 ), my mind went to the obvious women, the ones who have achieved greatness in a celebrity fashion. For me, Ita Buttrose from Australia probably came to mind because I have met her and we both share a quirky speech imperfection, commonly referred to as a listhp. Then there was Michelle Obama who also came to mind but it’s probably her biceps that I would write about being inspired by, and there would be more muscle than message in that article.
And then… you know what it’s like when you’re thinking of something and a song just pops into your head? Well, the song ‘More than a Woman’ wouldn’t leave me and that’s when I realised that we tend to head straight for the ‘big names’ when we go looking for role models, when in actual fact ,the real role models are average people with average names.
I mean who has heard of Agnes Beryl Carrucan and Doris Matilda Bracey-Finch? They were two extraordinary women, yet the world would never recognise their name or the legacies they left.

Agnes Beryl Connolly was born in 1905 and the seventh child of 14 children. She grew up in Thames, NZ on the Coromandel Peninsula and married Thomas Carrucan who had just returned from World War 1. They settled in Point Chevalier in Auckland, NZ and had a total of 14 children, sadly losing one. In 1951, Thomas died leaving Agnes (Beryl) to bring up these children on her own with the youngest, Anne, being only two years of age, and the eldest, Leo, being just 20.
What does a single mother do when there was no will left and 2/3 of the estate was lost, no income and no husband, with 13 other mouths to feed? How does she make it through every day, especially at a time where the world was filled with so much uncertainty – politically, socially and economically?
This woman not only was mother to her 13 children but added even more mouths along the way. She took in billets, and then once her brothers wives began to pass away, she stepped up to cook and wash for them as well. Why? Because she knew her place in the world, and it was not to be a cook and a washerwoman, it was not to be barefoot and pregnant – it was to give loads of love and have generations of women (and men) know their place in the world. 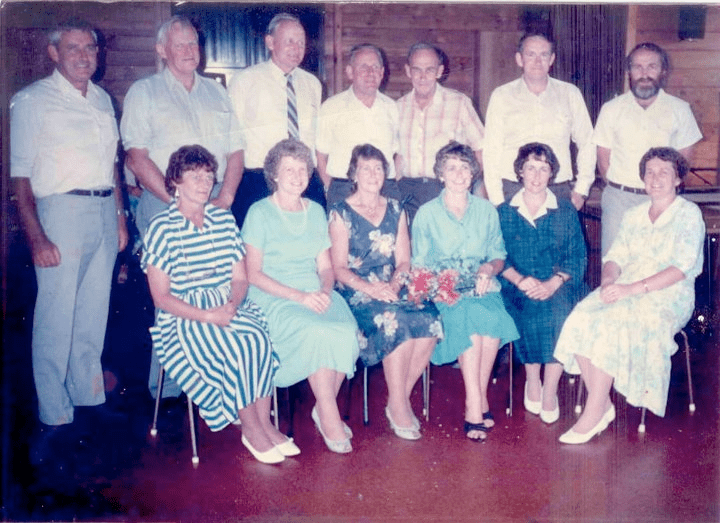 In a time where religion drove the beliefs of not just a community but a generation, how did this woman who once stood so proud as her eldest son walked through the seminary doors to become a Father in the Catholic Church, manage to hold her head high again when he walked out of those same doors after having fallen in love with a parishioner, learning instead he was to become a father of a different kind. How did she stave off the stares of that same community when torn between love of a son and duty to the rules of her faith?
Where was the alcohol, the drugs or the pills? People today seem to think numbing the pain and getting through the loneliness, the sadness, the feelings of hopelessness and disappointment, is to resort to resources that are external to them.
But by holding her head high, by not judging others, by not playing the victim card, by showing patience and tolerance and being prepared to welcome such diverse people into her life, demonstrated that the sustainable resources are the ones that will see us through tough times, and those resources are both internal and eternal.
We have them in spades and they are with us forever. Resources that are so deep within us that many people have buried theirs beneath layers of fear. Resources, such as leadership, resilience, gratitude, service to others, patience and kindness.

We have a choice

We have a choice to decide how we react to what life throws our way – we can become the victim in all of this or we can take the lead, not bury our head in the sand but put the shitty stuff on the shelf for the moment, and then see more clearly how to move through.
She was no entrepreneur, she was no leader of a company, she was no teacher but she was all of those and more. She was a true matriarch who changed the world in her small way, and has allowed us to realise the following:

* Laugh at things, stay young and don’t take life too seriously
* Read the tea leaves, make up a story about your own successful future and step into it now
* Love your children, forgive them and remember their children will one day want to share your story and refer to you as someone who impacted them.

The Quiet Revolution is what the 1970’s was referred to when it came to women leaving domestic life behind to join the workforce. Today, it is a different story, with women leaving the workforce in droves to work from home.
But in 1970, in a kitchen in Auckland, NZ, a woman was making plans to start her own quiet, entrepreneurial revolution to fill the void of the empty nest. She would be an entrepreneurial hybrid– she would keep her apron on and bring the workforce to her home.
Doris Matilda Dick was born in 1905 and married Russell Bracey-Finch, an Englishman known for his fine taste in fashion. For years she contributed to the household finances at a time many women stayed home and looked after the children. A well respected cook at a much respected function centre (The Orchid Room in Mt Eden, Auckland, NZ), the quality of her work shone through, she was the ideal employee and was also often found cleaning the city’s picture theatres for extra wages. A work ethic, second to none!
This quote by Martin Luther King, reminds me of her:

As a grandmother she taught her granddaughters the art of knitting and sewing and together they would clothe and dress dolls. She would brush her granddaughters hair every night 100 times with the old style bristle brush, she would teach them to iron on her kitchen table on layers of blankets, she encouraged cousins’ singing concerts around the piano and in the kitchen, she would walk miles to church every Sunday, rain hail and shine even with an ulcerated leg. Family was important to her and so was doing what she loved – all things cooking!
It didn’t take much to kick start the entrepreneurial dream. A simple request for someone to cater for a staff ‘do’, via her son’s golfing buddy. It started small with sandwiches and before long she found herself being asked to do 21sts and parties.

Let Others Do The Heavy Lifting For You

Word of mouth spread even further and through a connection with the local mayor she reached another market and her small hobby became a bit bigger. She found herself catering for up to 400 people for the NZ Labour Party, then again travelling up to 40 miles to cater for another 400 people under a marquee in the rain for the German Society, even delighting the Sports NZ Shooters Association by making a requested curry from eel, swan and duck.
All on a shoestring at a time where there was no insurance, no financial backing, no health regulations to abide by, but a strong reputation that preceded her.
Logistically, she leveraged her adult children and grandchildren as waitresses and waiters, as food delivery drivers, as butchers and bakers and fruit salad makers. The food was bought fresh the day before and all preparation done in her small kitchen. Clean. Healthy. Fresh. Imagine that scenario today!
What is equally important for any entrepreneur to succeed, is to know they have the support of their family, especially their partner. Her husband, a popular bartender in a city pub, would very rarely get involved with her business, yet he would always express his pride in what he believed she was doing – she was his ‘china plate’.

So what did she teach us?

* There are going to be times where budgets don’t allow spending but that doesn’t mean you throw your hands in the air and stop doing things – anything is possible, especially if you plan to do it well.
* There are going to be times when you have no choice but to knuckle down, use what you have at your disposal, leverage others, delegate and serve the people what they want, not just what you want to give them (food aside!).
* There are also going to be times where you think you need to come up with something different, new and out of the box but that doesn’t mean you don’t look at simple, old fashioned ways of doing things that worked in the past – translated today in a busy, crazy world we live in, like phoning people and sending real letters.

Who are these women?
In celebration of International Women’s Day 2015 #IWD2015, I could think of no-one more appropriate through which to share my message of motherhood and entrepreneurship than through my two grandmothers.
They enriched my life when they were alive and they continue to be on my mind as I think forward and also reflect on my place in the world – as a mother and as an entrepreneur.
Whilst they both had different and unique strengths, they individually and collectively, showed me the power of tapping into my resourcefulness and resilience in tough times, of having a dream and going for it, of being bold and being brilliant.
What a legacy and for that I am eternally grateful!

EVENT ORGANISERS (Video below) – My programs help your clients, whether they be corporate sales teams or Association members, to be more effective at connecting, conversing and converting more profitable and purposeful opportunities.