Why Coffee Is SO Not For Closers! 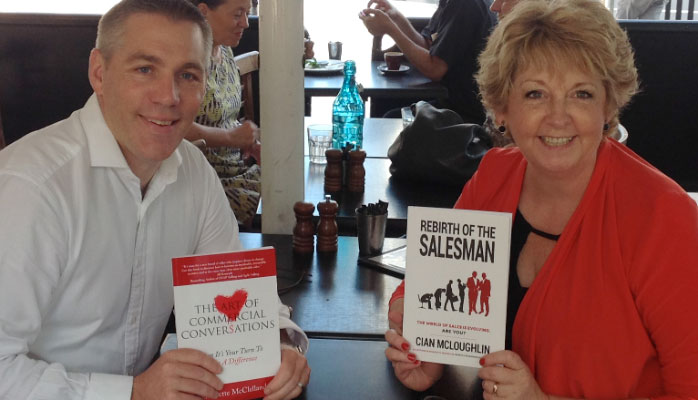 Once upon a time, two salespeople of Irish decent, met at an Irish cafe on the north side of Sydney, shared a cup of coffee and…

Spending time with Cian McLoughlin, who has recently written, published and launched his new book ‘The Rebirth of the Salesman’, was enlightening to say the least and of course, it had to be, both our names begin with Mc :), but I digress!

Discussing everything from the rise of robots and AI in the sales environment, to the highly stressful environments salespeople find themselves in today, to the need for salespeople to up the ante on their own relevance and competitiveness when it comes to win/loss ratios – it certainly showed we share many similar philosophies and experiences.

McLoughlin’s book, whilst titled ‘The Rebirth of the Salesman’ is not directly aimed at the masculine demographic, rather it is a modern day replacement of a book written a few years ago titled, ‘The Birth of a Salesman – The Transformation of Selling in America’ written by Walter A. Friedman – a book that came after the play, ‘Death of a Salesman’ in 1949 written by American playwright Arthur Miller.

And before anybody jumps on the sexist bandwagon…

I wholeheartedly ‘get’ the meaning behind the title and love what has been written in evolving an old world theme to be current day (even though I advocate the rise of women in sales and sales leadership roles today versus the rise of robots!).

Whilst the original book ‘The Birth of The Salesman’ demonstrated how sales evolved from an art of peddlers and hawkers in the era of industrial revolution to a science that included methodologies and disciplines where the term ‘salesman’ and selling as an industry came into it’s own, McLoughlin has taken this concept to a new level.

Fresh, provocative and especially relevant for all salespeople in B2B roles who may be new to or working on complex sales, these are the few key points I highlighted whilst mid-air on my flight back to Melbourne:

With predictions that business to business commerce will never be the same again, potentially almost a quarter of the entire B2B salesforce (one million sales reps), will lose their jobs by 2020 and he explains what prompts this momentous statement.

He interviews key sales leaders and C-Suite decision makers to provide and share a cross section of perspectives they have led, seen and experienced in those salespeople and leaders who have attained a near perfect level of sales mastery so you are able to understand what the difference is that makes the difference and benchmark yourself against it.

He carefully and politically blends insights, ideas and informed viewpoints from opposing sides of the sales spectrum, providing steps and how to’s in order to sell more effectively in today’s changing sales landscape – expectations straight from the minds and mouths of our buyers.

Most of all, he shares his stories. A veteran enterprise sales leader with his own share of wins and losses, he now passionately and authentically taps into an area of business acumen that many salespeople and sales leaders omit, potentially leaving millions of dollars on the table by peppering the pages with the power of his signature WIN/LOSS process.

Times are changing, we realise that! Businesses are hurting, we know that! Salespeople and sales leaders are not adapting quickly enough and they are beginning to realise too little, too late. They need an evolution wake up call.

And I can think of no better way to do that than grab a copy of this book, find a really great coffee and read it from cover to closing cover!

Bernadette McClelland is a Sales Leadership and Mindset Speaker whose message for businesses, sales teams and associations is based on doing business in this new Connection Economy.

Her signature keynote 'SELLING. SELLING. SOUL'd' is ideal for event organisers within corporate, associations and franchise groups looking to increase revenues and differentiate theselves in today's competitive market. Leveraging her 5-step philosophy she provides essential insights for her audiences to sell more by inspiring them to flip the script and inspire the buyer.

3 Red Folders is her sales leadership consultancy where she has a reputation for helping businesses create sales smart cultures through sales strategy, process and psychology.